When Jim Jordan took questions from a crowd at the Harding Home in Marion last week, he told us, “Health care gets better and costs less when Obamacare is gone.”  He offered no explanation for how this might happen.  Just a few days earlier, Jordan had joined with other House conservatives in the Freedom Caucus to back Rand Paul’s Obamacare Replacement Act (S. 222).  What’s in this plan?

The plan offers a $5000 nonrefundable tax credit to every taxpayer, regardless of how the taxpayer gets his/her insurance.  Even Jim Jordan, who is provided excellent benefits as a member of Congress, is eligible for this credit.  The money must be placed in a health savings account.  This nonrefundable tax credit is limited to your tax bill.  If you are low income and don’t pay income taxes, you get nothing.

For example, a couple with two young children and a family income of $40,000 would owe zero taxes, thus receiving no subsidy to buy health insurance under the plan Jordan endorses.  Meanwhile a childless couple earning $150,000 would receive the full tax credit of $5,000 per person ($10,000 total) to place in their Health Savings Accounts.  If they are insured through their employers, their out of pocket costs might be far lower than this.  Not to worry, however. The Rand Paul plan allows HSA money to pay for lots of upper middle class goodies, like exercise equipment, gym memberships, personal trainers, nutritional supplements, medical concierge services, and more.

In the Rand Paul plan, we find a familiar theme: the rich get richer.  Meanwhile, many low income workers will lose their healthcare.

What about pre-existing conditions?  Jordan assured the crowd in Marion that they would be covered.  The truth is more complicated.  In the first two years of the law, no one would be excluded.  After the first two years, however, it’s back to the old rules before Obama’s Affordable Care Act.  The Paul plan restores HIPAA pre-existing conditions rules that were enacted in the 90’s.  These rules depended on maintaining continuous coverage, and many people had difficulty meeting the conditions.  Those anxious times would return under the plan that Jordan endorses.

What happens to coverage for maternity care or mental health care?  The Paul plan repeals requirements for essential health benefits like these.  If a woman is buying an individual health plan and wants maternity coverage, she will pay dearly for it.

What about other GOP healthcare plans?

If Jordan and the other members of the Freedom Caucus don’t get their way, what else are Republicans proposing?  Republicans are designing their plans around three reform concepts:

The plan will be worse for people who are poorer and sicker, and better for people who are richer and healthier. According to an analysis commissioned by the National Governors’ Association, millions of people near the poverty line and those with poor health may not receive enough tax credit to afford the coverage they need.

This graph from the Kaiser Family Foundation shows the difference between the Obamacare income-based tax credits and the proposed age-based tax credits.  Notice that the Obamacare credits shown in dark blue are larger at the low income side of the diagram, while the Republican plan credits shown in gold are uniform across all three income levels shown. 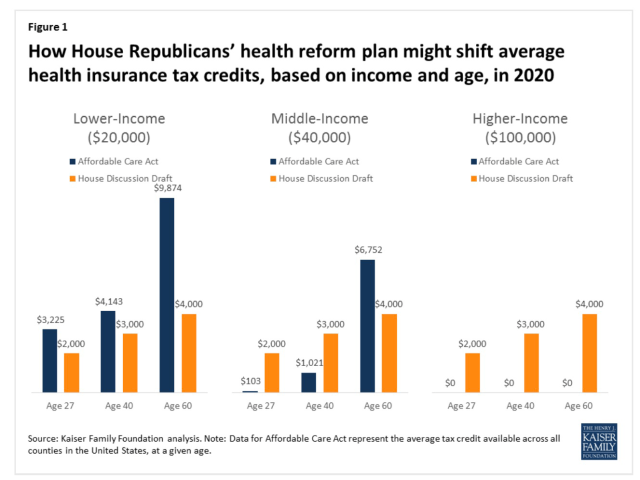 The Republican plan gives the same tax credit to everyone regardless of his or her need.  Because the subsidies are not means-tested, they are likely to increase the deficit above and beyond Obamacare costs.  Yet the plan will not expand coverage, since credits are being given to people who can afford coverage without them.

What values shall we embrace?

Obamacare was developed as an answer to Americans’ concerns about people who couldn’t afford healthcare.  We value taking care of the most vulnerable among us: children, low income workers, the poor, sick, and aging.  Meanwhile Republicans like Jim Jordan are reluctant to provide that help.  They agonize over creating new “entitlements.”  Rand Paul says he favors a smaller tax credit that “not everyone” would get.

Not everyone, indeed.  Republicans apparently regard healthcare as a privilege, not a human right.  That’s why they seem to be ok with denying healthcare to many people who provide assistance for their daily lives, like the folks who serve them coffee at the fast food drive thru, the waitress who brings them their lunch, or the janitor who cleans their office.  In Republican eyes, it would seem that healthcare is a ‘privilege’ these people have not earned.  Many Americans beg to differ.

The Universal Declaration of Human Rights, signed and ratified by the U.S. has this to say about medical care:

“Everyone has the right to a standard of living adequate to the health and well-being of himself and of his family, including food, clothing, housing and medical care and necessary social services…..” Universal Declaration of Human Rights, Article 25

If Republicans are unwilling to honor these rights through the Affordable Care Act, then I suggest they check out a bill sponsored by Rep. John Conyers along with 61 cosponsors, H.R. 676 Expanded and Improved Medicare for All Act.  Learn more about the cost-effective and humane single payer approach to healthcare from SPAN-Ohio.

As Martin Luther King, Jr. said generations ago, “Of all the forms of inequality, injustice in health care is the most shocking and inhumane.”  The moment is urgent; we must speak out now to defend healthcare for all Americans.

Note:  Rep. Jim Jordan’s constituents in Ohio District 4 have an opportunity to speak up at Jordan’s Norwalk office on March 7 at 11 am.  Join us for this demonstration and meeting with Jordan’s aide.  Read more and RSVP here. 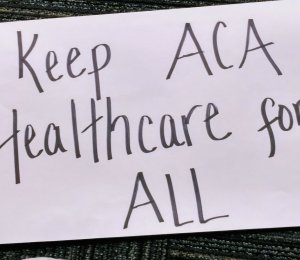