Cleveland activists to speak on systemic racism and police brutality 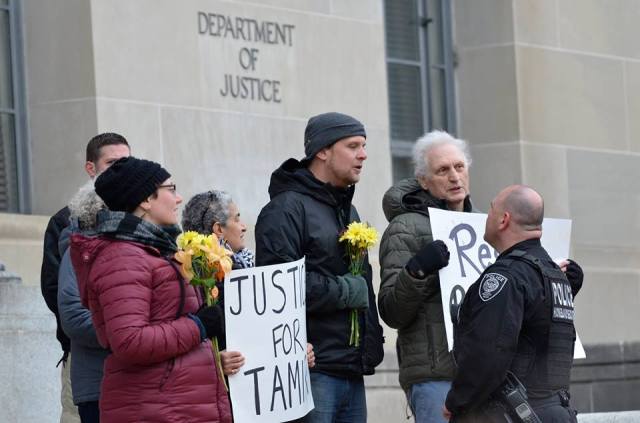 People for Peace and Justice will host two police accountability activists from Cleveland at our March 16th meeting at First UCC in Fremont.
Chris Knestrick and Bishop Chui, two Cleveland residents and activists, will discuss the work being done in Cleveland to end systemic racism and its manifestation as police brutality. The conversation will begin with seeking to understand systemic racism in general and then focus the discussion on the work being done in Cleveland to end police brutality.
Chris Knestrick is a member of Cleveland Catholic Worker Community and Witness Against Torture. He helps run a drop in center in Cleveland and organizes to end state sponsored violence.

Bishop Chui is a community organizer in Cleveland’s Glenville neighborhood, a protester against police brutality and a longtime advocate for police accountability.

The schedule for the evening is:
6:30pm –  Potluck and conversation with our guests
7:30 – 8:30pm –  Program: Cleveland activism to end systematic racism and police brutality
First UCC Church, 1500 Tiffin Rd., Fremont
All are welcome for both the potluck and the program!  We hope you’ll make plans now to join us and bring a friend!
Top photo: Cleveland Action  Justice for Tamir demonstration.
Middle photo:  Witness Against Torture rally at the Department of Justice in Washington to demand justice for Tamir Rice, a 12-year old boy shot by police on a Cleveland playground.
Bottom photo: Washington, DC police officer photographs activists banner at the DOJ.
Advertisement