Back to Iraq? No Way! 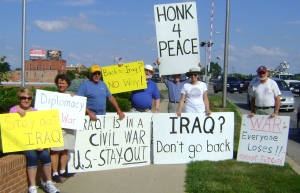 We’ll be out again this Wednesday July 9 to demonstrate against US military intervention in Iraq.

Corner of Front and W. State St. in Fremont

All are welcome to join us.

In a recent interview with Moyers & Company, Iraq specialist Raed Jarrar outlines what we in the West should know. Like many Iraqis, he is half-Shiite, half-Sunni, and in preinvasion Iraq he barely knew the religious identities of his relatives because “sect wasn’t really a part of the national consciousness.”

Jarrar reminds us that “this sectarian strife that is destroying the country … clearly began with the U.S. invasion and occupation.”

The aggressors destroyed “Iraqi national identity and replaced it with sectarian and ethnic identities,” beginning immediately when the U.S. imposed a Governing Council based on sectarian identity, a novelty for Iraq.

By now, Shiites and Sunnis are the bitterest enemies, thanks to the sledgehammer wielded by Donald Rumsfeld and Dick Cheney (respectively the former U.S. Secretary of Defense and vice president during the George W. Bush administration) and others like them who understand nothing beyond violence and terror and have helped to create conflicts that are now tearing the region to shreds.

This entry was posted in War and peace. Bookmark the permalink.