Getting money out of politics: Move to Amend

PPJ is part of the Move to Amend national movement, working to get money out of politics. This grassroots movement seeks to amend the U.S. Constitution to overturn the Supreme Court’s ruling in Citizens United.  According to Move to Amend:

We, the People of the United States of America, reject the U.S. Supreme Court’s ruling in Citizens United and other related cases, and move to amend our Constitution to firmly establish that money is not speech, and that human beings, not corporations, are persons entitled to constitutional rights.

In December 2012, PPJ joined with allies to help pass a Fremont City Council resolution endorsing the position that “corporations should not receive the same legal rights as natural persons, that money is not speech, and that independent expenditures [for election campaigns] should be regulated…”

PPJ has collected signatures for the Move to Amend effort at our booths at several area events:  Farmer’s Market, Dignity Day, and Tiffin’s Peace Fair.  They will continue their efforts at their Sandusky County Fair booth, August 19-24. 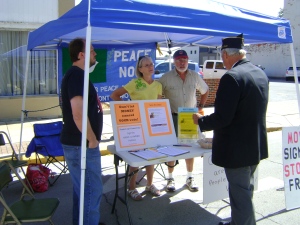 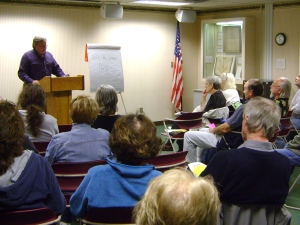 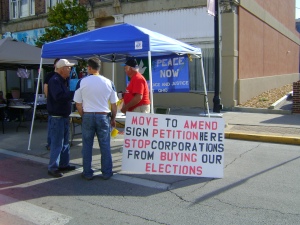 PPJ hosted a speaking event at Birchard Public Library with Doug Jambard-Sweet from Toledo Move to Amend.  Out of this event we forged alliances to pass a Fremont City Council resolution in support of overturning Citizens United.